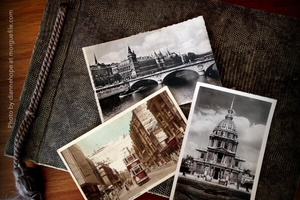 Photographs and images can add so much to your family history research - many of us have family photographs for a couple of generations back. Images of famous places and people are also pretty easy to find. But what if you'd like to know about how and where more distant ancestors lived? In this blog, we look at one source of images you might not have come across before and which could give greater understanding of how your grandparents and great grandparents lived.

Walking through a shopping centre in Livingston in West Lothian, a window display caught my eye - genealogists can spot a birth certificate at a hundred paces!

This led to another sign in the window for the Living Memory Association (LMA), an Edinburgh based project aiming to bring people together through reminiscence and oral history work. They were also working to gather memories of Gala Days in West Lothian, although this project has come to an end now, at least for the time being. The Association's centre in Ocean Terminal, Edinburgh (which is next to the Royal Yacht Britannia, if you're visiting) has a dedicated reminiscence room containing "shelves stuffed full of bygone bric-a-brac (1920s OXO tins to 1970s platform shoes)."

The Living Memory website also has a photo archive. This contains over 1600 old family and personal photographs, capturing mostly Edinburgh and Scotland, from the 1850s through to the 20th century. There’s a wide range, from simple family snaps to photographic studio images. It's a great resource to see how people lived and dressed, or for buildings and a way of life that no longer exist.

With the kind permission of the LMA, here are three examples: 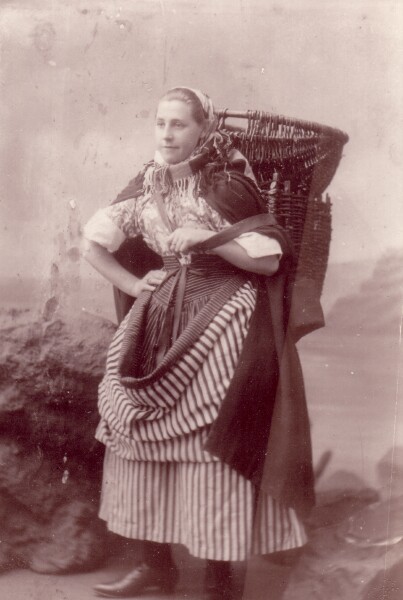 The caption for this photo says

The photograph is of Elizabeth Watson aged 22 and was taken at a photographer's studio. A Fisherrow fishwife dressed in her best clothes for the photograph. When fishwives went out selling they usually had navy skirts and tops. The fish she would be selling would have come from her husband's boat.

Walter Watson aged 23 taken at a photographer's studio. This is the husband of Elizabeth Watson who had his own fishing boat in Fisherrow Musselburgh.

Intrigued, Scottish Kin decided to investigate a little further. Our research showed that both Elizabeth and Walter had been born in the area, children of fishermen, and at the time of their marriage in Musselburgh in 1909 Walter was a fisherman and Elizabeth a fish hawker. By the 1911 census they had moved into 19 Bush Street with their 2-month old twins Euphemia and Margaret. This was just down the road from Fisherrow Harbour, and they continued to live in the same property until their deaths. Elizabeth died in the Royal Infirmary, Edinburgh in 1959 and Walter at 19 Bush Street in 1961. Curiously, however, the record for Walter Watson and Elizabeth Millar's marriage gives his age as 26 and hers as 25, suggesting that either the photos were taken before their marriage, or that Elizabeth was a little older than 22 in this photo.

The John Gray Centre, East Lothian's heritage centre in Haddington, describes the Fisherrow fishwives as:
"known for their distinctive striped skirts and aprons ... an incredibly important part of East Lothian’s heritage. These women worked long hours in physically demanding jobs and cared for their large families whilst their husbands were at sea for long periods of time. The work of the fishwives began even before their husbands’ and fathers’ boats had left the harbour. Fishermen rarely married outside their community, so fishing was a family occupation."

The wedding of Fred and Aida Tubb 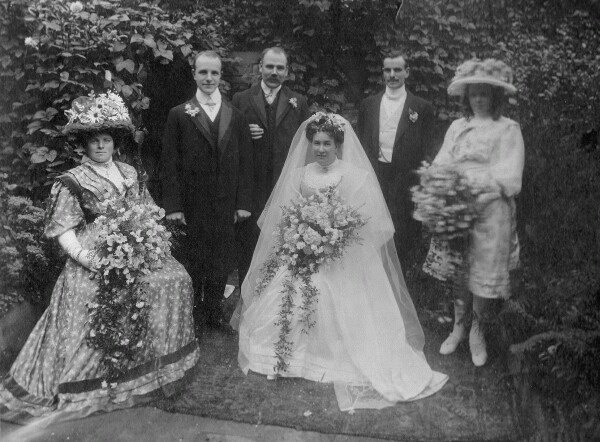 This photo is subtitled "The Tubb family outside Southwark Cathedral" in 1908.

Looking more into the story behind the photo, Scottish Kin's research found that Frederick George Henry Tubb, a 24 year old book-keeper, and his bride, Aida (originally Ada) Isabel Walton, aged 34 were married in Southwark (London) on 22 August 1908. Both were Londoners, baptised in Southwark and Brixton respectively.

The couple moved to New Zealand, where they had three children, Theresa (1911), Adrian (1912) and Paul (1918). Frederick became a farmer, and they lived firstly in Springhills, Southland, followed by Dunedin West, Otago and Invercargill, Southland, where Frederick returned to being a clerk. He was called up for WW1 service in the first ballot for “men with two children” in June 1918. After attesting for service with the NZ Expeditionary Force in Invercargill on 2 July 1918, Frederick was granted leave without pay until 18 October 1918, but in August 1918 appealed to the Military Service Board “on conscientious grounds.”

The Southland Times of 27 August reported that “[Frederick] was associated with the International Bible Students’ Association. His wife was at present in the Hospital. He handed lengthy statements to the Board which Mr Bell objected to the Chairman’s reading, classing them as “inflated rubbish”. The Chairman thought that the Board had gone into the views of every religious body in New Zealand, amongst which were those of the Bible Students’ Association. The appeal would be dismissed.”

His service record shows that he arrived at camp on 23 October but by 2 November had once again been granted leave of absence.

The family subsequently moved to Auckland. Aida died in 1942 and was much missed by Frederick, as his newspaper notice from 1945 shows:

“TUBB Aida Isabel - My adorable, superb, very dearly-beloved wife for 34 years, and only sweetheart, who died at 4.15a.m. on Sunday, May 17, 1942. Incomparable, peerless and matchless”

Unfortunately for Frederick, he was again featured in the New Zealand and Australian newspapers in September of the same year, when it was discovered that he had followed Aida’s last wish to be embalmed and had kept her coffin in a large shed on his property at Pine Island. He had intended to build a mausoleum but WW2 intervened and he hadn’t been able to obtain the necessary materials. In addition, his monumental mason son Adrian was on active service in Italy. The situation came to light because a neighour had seen a young lady enter the shed with flowers on Sundays, and when the neighbour investigated, they found the coffin. As an Auckland woman had disappeared at around the same time as Aida’s death, suspicions were aroused. The police investigated and Frederick was completely exonerated, with the District Health Officer even promising to use his influence to get the cement necessary to build the mausoleum.

Frederick survived his wife for another 32 years, dying in 1977 at the age of 93. He was buried in Purewa Cemetery, Auckland on 7 December and later the same month Aida was interred next to him - together again.

Ready for Evacuation in 1939 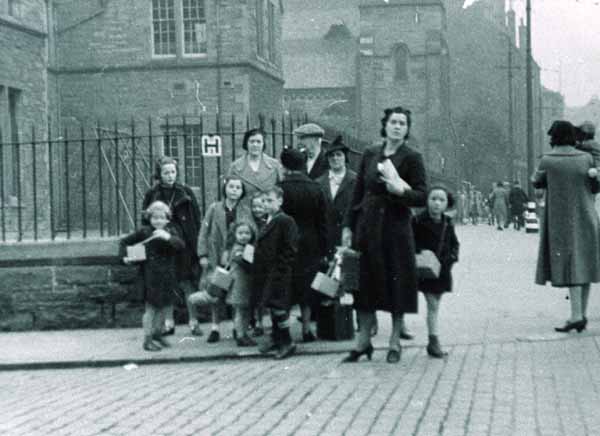 Finally, a slightly more modern image. According to the LMA photo archive, this image was taken outside Dalry School in Edinburgh by Mr L.P. Bain on September 1, 1939 as children wait for evacuation. The second world war was just beginning, as Germany invaded Poland on September 1, 1939. Two days later, after an ultimatum was ignored, Britain and France declared war on Germany.

The Edinburgh Evening News described how between 300 and 400 children and mothers were waiting outside the school by the time the evacuation process began at eight that morning. At nearby Gorgie School the process had begun earlier, at seven o'clock, and the same newspaper reported on the touching scenes, particularly where mothers were staying at home while their children went away alone.

The first air raids fell on Edinburgh nearly a year later, on July 18, 1940. In total, there were 20 deaths and 210 injuries in Edinburgh from bombing during the war.

These are just three examples of the diverse range of images available in the photo archive. So many stories - as always with family history, you never know what you might find out.

Flesher: A butcher
Press: A cupboard or closet e.g. a kitchen press
Writer: A lawyer or attorney.