Warlocks and Scandal in West Calder 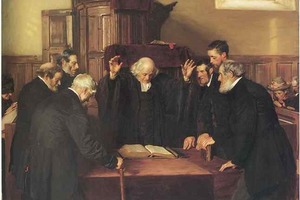 We were reminded again recently how useful, and fascinating, Kirk Session records can be - and how easy it can be, when working page by page through the unindexed records, to get sidetracked by an interesting story or two. This blog post looks at two records from the West Calder Kirk Session of the 1670s: perhaps some of the names will be familiar to those with West Calder and Mid Calder roots.

As mentioned in our earlier blog post about the records of the Kirk Session, the Session took a great interest in their parishioners’ private lives. But we recently came across some records which showed that the parishioners could also make full use of the Session to resolve complaints and disputes between themselves.

These transcriptions are from the West Calder Kirk Session from 1677 and 1678 and show how the Kirk elders received complaints, interviewed witnesses, passed judgement or absolved parishioners – and also what happened when a parishioner simply refused to appear before them. They also show the great variety of ‘offences’ the Kirk Session dealt with.

But mainly we just found them really interesting!

A couple of terms may be unfamiliar: to compear means to appear before a congregation, jury or court for an examination or rebuke; and a testificat, in these records, is a certificate of a person’s good character, usually for them to take to another parish Kirk Session if relocating, or if they were having banns of marriage proclaimed when marrying a person living in another parish.

The Session had a busy meeting on June 24th1677, with allegations of inappropriate kissing, bribery and disobedience...

The Session referred Jonet Gothskirk to my Lord Torphichen, that his
Lordship may be pleased to take such course with her, as he shall think fit,
because of her disobedience in refusing to compere before them, though
she was formally cited to that effect two several days before this.

Compeared John Bewgo in Livingstone Parish, who denyed all that
Jonet Wilson accused him of, save only that he kissed her, but not out
of any evil intent. Whereupon he freely offered to purge himself by
his Oath of the Scandal before the Session, which he did at that same
instant; confessing withall his light carriage in kissing her, which he
acknowledged to be an act not becoming a man of his gravity & profession.

William Flint gave in a Declaration to the Session written & sub-
scribed with his own hand, signifying that he is now convinced of John
Bewgo’s innocence in reference to that Scandal raised of him with his
wife Jonet Wilson. And as for the money, which he was reported to have
received from John Bewgo as a Bribe to conceal the Scandal, he declares
that he borrowed it from the said John Bewgo upon security which he offered him
for the payment of it again. And therefore because of the Offence that he
hath given, he craves pardon & submits himself to any Censure that
shall be pleased to inflict upon him.

William Flint ordained to compear before the Session the next day they
are to meet.

James Steel & Jonet Grahame desiring Testificates, they were granted
to them: but Jonet Grahames Testificate to mention her Fornication with
James Alexander; & her publick Satisfaction which she made for the same.

About a year later, Gavin Graham complained to the Kirk Session that Bessie Roxburgh was spreading rumours about him, in particular claiming that he was a warlock. The Witchcraft Act was in force in Scotland between 1563 and 1736, with five periods showing high levels of accusation and prosecution of witches: two in the 1590s, 1628-30, 1649 and 1661-2, so this episode falls outside these peaks, but it was clearly still a touchy subject. The University of Edinburgh’s School of History and Classics has a fascinating website and database of their survey of Scottish witchcraft, giving details of 3,219 individuals accused of witchcraft in early modern Scotland.

About 85% of those accused of witchcraft were women, so it was interesting to read of the spreading of a rumour of a man being a warlock. This record picks up the story as the elders interview parishioners to find out whether Gavin Graham's complaint was justified...

November 17 1678
Compeared Wm Baird, who being questioned concerning that which his Wife
had said of Gawin Grahame professed that all he said was, that he heard Eliza-
beth Fairholm say in the Mill before diverse Witnesses (whom he named) that
the said Gawin Grahame was put out of Cambusnethen for Witchcraft.
Compeared Rachel Black one of the Witnesses, who said that all she heard
Bessie Roxburgh say, was that she heard it said he was a Warlock & for
that cause he was banished.

The Session ordains the Parties & Witnesses to be here against the next
Sabbath.

Rachel Black & her Daughter are ordained to be cited against Tuesday
next.

November 26 1678
Rachel Black being examined upon oath deponed, that all which she heard Bes-
sie Roxburgh say was, that she heard Gawin Grahame had an ill word of
a Warlock.

Bessie Henry being examined upon oath deponed, that all which she heard Bessie
Roxburgh say was, she heard it said that Gawin Grahame was a Warlock.

The Session delayeth the Sentence till another time.

December 8 1678
The sentence in Gawin Grahame’s Process being deferred till such time,
as my Lord Torphichen should be present, & his Lordship being this day present,
the Session ordains Bessie Roxburgh to be rebuked before them: & as
for other circumstances they refer her punishment to the Civil Ma-
gistrate.

As Bessie Roxburgh was rebuked by the Kirk Session, the elders must have felt that she was guilty of Scandal (in modern terms, defamation) and that the rumours were unfounded.

Main image: The Ordination of Elders in a Scottish Kirk by John Henry Lorimer, 1891, via Wikimedia Commons.

Brabener: A weaver
Souter: A shoemaker or cobbler
Corrie-fisted: Left-handed

The report is fabulous! Thank you so much. I love the style and mix of narrative and charts/photos. And you tracked down [family middle name]!